Written by The Democracy Fund
November 09, 2022 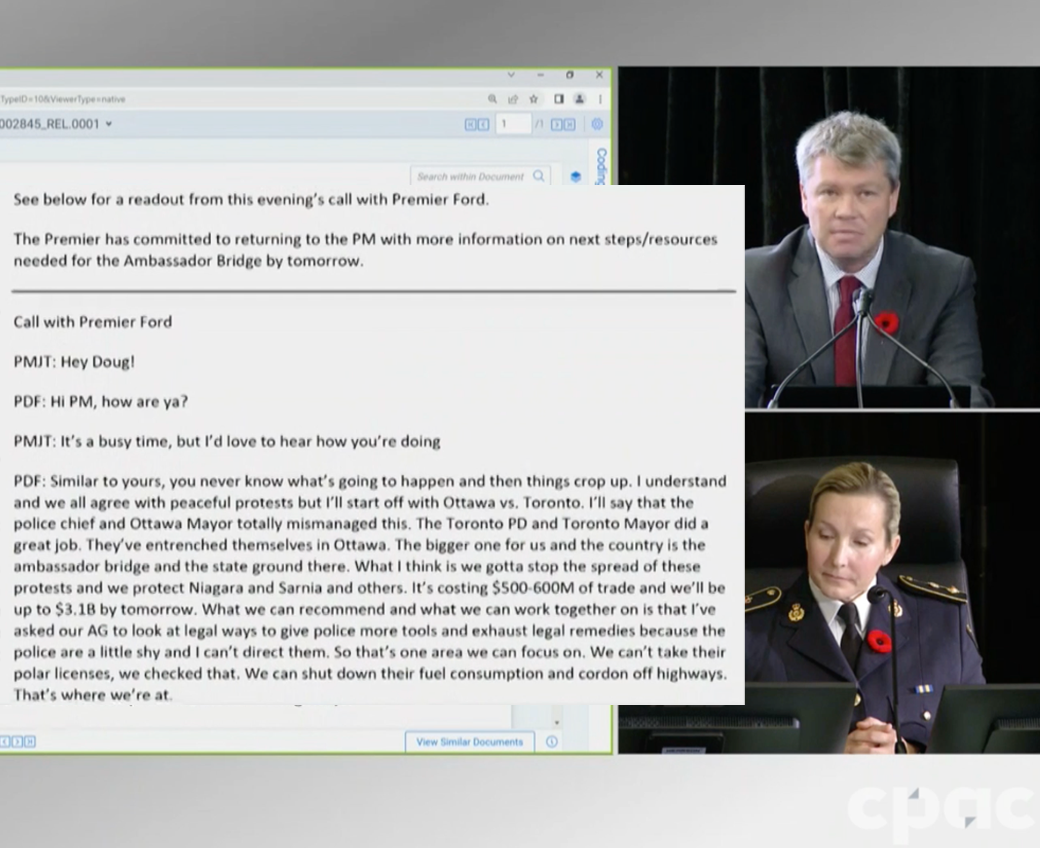 During this cross-examination, Honner put to Supt. Earley, a transcript of a call between Ontario Premier Doug Ford and Prime Minister Justin Trudeau, made on February 9, 2022. This document gives exceptional insight into the concerns and frustrations of the federal and provincial governments during the height of the Freedom Convoy protests.

A read-out of a phone call between the Prime Minister and Ontario Premier Doug Ford was admitted before the Public Order Emergency Inquiry by our litigation director, Alan Honner, on Tuesday.

The transcript shows Trudeau demanding that the police take action to clear the blockade at Windsor's Ambassador Bridge but was told by Premier Ford that Ford could not direct the police. Trudeau did not appear to understand that the Windsor mayor could not direct police operations. The Prime Minister also worried that Ontario might appear to be a "laughing stock" for its inability to clear the bridge. Notably, during the call, Trudeau said that the police had the legal tools they needed to clear the blockade. However, just five days later, the federal government declared a public order emergency under the Emergencies Act, which requires that the situation "cannot be effectively dealt with under any other law of Canada."

TDF is present in Ottawa to hold the government accountable for its improper declaration of an emergency. With your generous support, we can cover legal fees, travel expenses, and economy-class accommodations for our lawyers. If you can help contribute to our fight, please consider making a tax-deductible donation today.

About The Democracy Fund:
Founded in 2021, The Democracy Fund (TDF) is a Canadian charity dedicated to constitutional rights, advancing education and relieving poverty. TDF promotes constitutional rights through litigation and public education. TDF supports an access to justice initiative for Canadians whose civil liberties have been infringed by government lockdowns and other public policy responses to the pandemic.