Do Not Give Up Your Rights 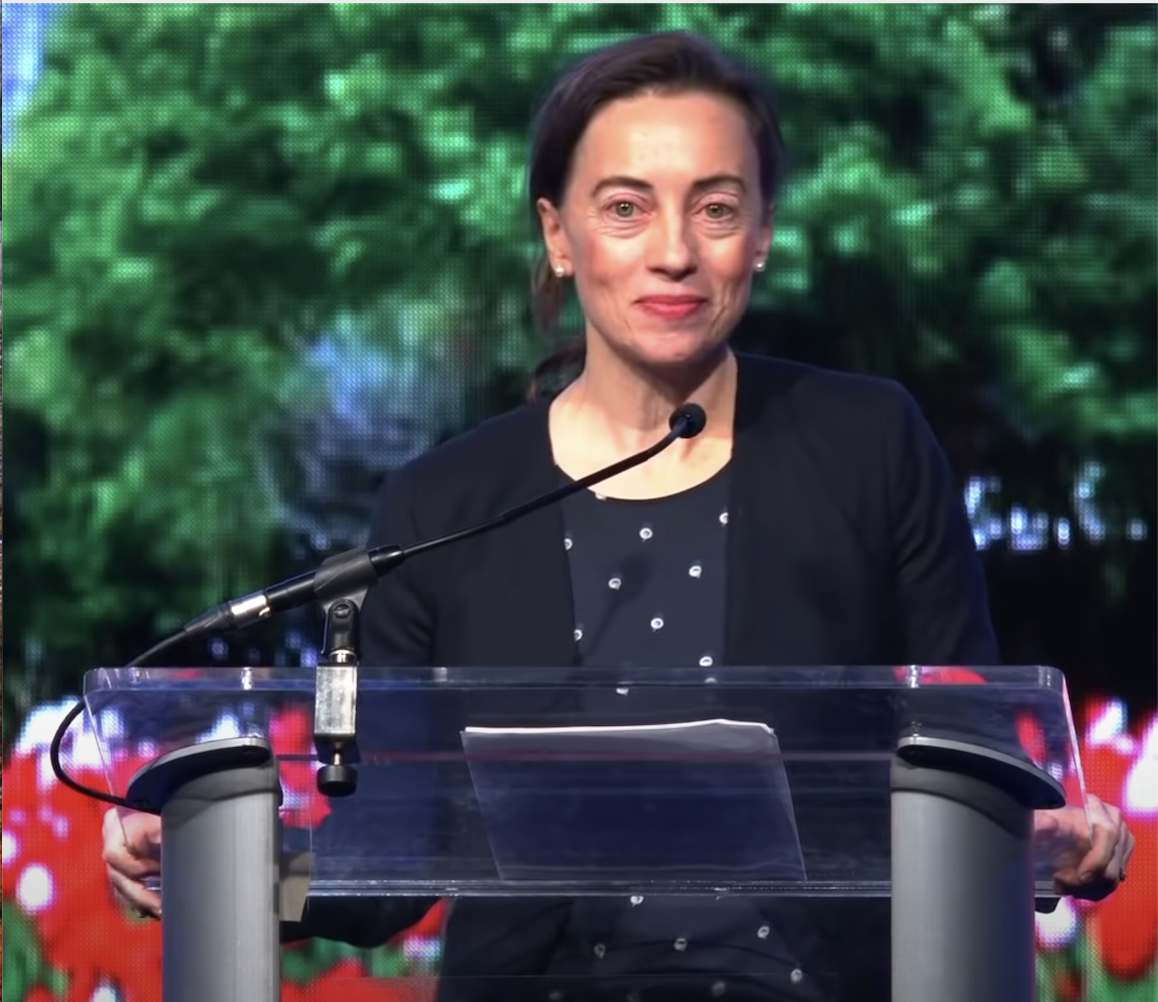 Dr. Julie Ponesse's first speech at The Democracy Fund's Faith and Democracy Series event where Dr. Ponesse asks Canadians to stand up for liberty and be the noisy 10 percent that is needed to make a difference.

Think back to a couple of years ago—fall 2019, let’s say. What were you doing then? What was your life like? What did you care about? What did you most fear? What DID YOU IMAGINE ABOUT the FUTURE?

That’s the person I would like to talk to for the next 15 minutes, + I’ll begin with my own story: At the end I’ll have a FAVOUR to ask plus a little SECRET to share.

In the fall of 2019, I was a professor of ethics and ancient philosophy; I taught students critical thinking + the importance of self-reflection, how to ask good questions and evaluate evidence, how to learn from the past and why democracy requires civic virtue.

Fast forward to September 16, 2021 when I received a “termination with cause” letter after I questioned, and refused to comply, with my employer’s vaccine mandate. I was dismissed for doing exactly what I had been hired to do. I was a professor of ethics questioning what I take to be an unethical demand. You don’t have to look very hard to see the irony.

Canada is governed by laws which are based on ethics. You could say that ethics are the bedrock beneath our democracy.

“The right to determine what shall or shall not be done with one’s own body, and to be free from non-consensual medical treatment, is a right deeply rooted in our common law.” These aren’t my words; they are the words of Justice Sydney Robins of the Ontario Court of Appeal.

With very few exceptions, each person’s body is considered inviolate in Canadian law, and this is the underlying ethos of the Nuremberg Code, a promise to humanity that we would never again endorse uninformed, non-voluntary medical decision-making, even for the patient’s own good, even for the sake of the public good.

By definition, vaccine mandates are coercive immunization strategies: in the absence of coercion — the threat of a loss of employment, for example — people would not voluntarily agree to do what the mandate is trying to achieve!

Employers are holding our careers hostage, and removing our participation in the economy and in public life. Their justification is that “we are in a pandemic,” and we must therefore relinquish autonomy over our bodies for the sake of the public good.

So, let’s talk about autonomy and the public good for a minute.

In emergencies, the Parliament and provincial legislatures have a limited power to pass laws that violate certain Charter rights for the sake of the public good. But, to justify those violations, vaccine mandates would need to meet a very high threshold: COVID-19 would, for example, need to be a highly virulent pathogen for which there is no adequate treatment, and the vaccines would need to be demonstrably effective and safe.

The current state of affairs in Canada meets neither of these criteria.

2) a number of safe, highly effective pharmaceuticals exist to treat it (including monoclonal antibodies, Ivermectin, fluvoxamine, Vitamin D and Zinc), AND

3) The vaccines have reported more adverse events (including innumerable deaths) than every other vaccine on the market over the last 30 years.

In light of these facts, I have so many questions:

Why are the vaccinated granted vaccine passports and access to public spaces, when the Director of the CDC has stated that the COVID-19 vaccines cannot prevent transmission?

Why is vaccination the ONLY mitigation strategy when emerging evidence (including a recent Harvard study) shows no discernible relationship between the vaccination rate and new cases?

Why does our government continue to withhold Ivermectin as a recommended treatment when the U-S National Institutes of Health supports it, and when the state of Uttar Pradesh in India distributed it to its 230 million people, reducing its COVID death rate to almost zero? How has India surpassed Canada in Health Care?

Why are we about to vaccinate 5 year olds when COVID poses to them less risk than the potential vaccine reactions AND while there is NO effective monitoring system for the vaccines?

Why are we focused on the narrow benefits of vaccine-induced immunity when real-world studies show natural immunity is more protective, more potent, and more enduring?

By every measure and from every angle, this is a ‘house of cards’ about to crumble

But the question that interests me is why hasn’t it crumbled already? Why are these questions not the headlines of every major newspaper in Canada every day?

Have the right people simply not seen the right data? Is it just a clerical error…on a global scale?

What has happened to our leadership? Our Prime Minister leads the battle cry:  “Don’t think you’re getting on a plane,” he threatened. Campaign promises are now segregationist public policy. Our government encourages us daily to be divisive and hateful.

It’s my observation that we are facing a pandemic not just of a virus but a pandemic of compliance and complacency, in a culture of silence, censorship, and institutionalized bullying.

MainStreamd Media likes to say that we are fighting a “war of information” — that misinformation, and even questioning and doubt, have plagued this pandemic.

But it is not only information that is being weaponized, in this war; it is a person’s right to think for herself.

I have heard it said “well I don’t know that much about viruses” so I shouldn’t really have an opinion. but…

The issue is not whether you know more about virology than our public health officials; the issue is why we aren’t all calling them out for not being willing to engage with the evidence and debate someone who has a different opinion.

We should be calling not for an outcome but for a process to be reestablished.

Without that process, we are in a kind of moral war.

But, the wars of the past have had clear and distinct boundaries: the east and the west, patriots and government.

The war we find ourselves in today is one of infiltration instead of invasion, intimidation instead of free choice, of psychological forces so insidious we come to believe the ideas are our own and that we are doing our part by giving up our rights.

It is about where we draw the line.

There is, I would argue, little value in insuring the survival of our nation if our freedom to debate, to criticize, to demand evidence for what our government asks of us does not survive with it.

As someone born in the 70s, I never thought THIS would be a war I would have to fight, that the right to bodily autonomy, to the free and transparent exchange of information would be at risk.

Think for a minute about the the most unimaginable harms of the last century  — the ‘final solution,’ South African apartheid, the Rwandan and Cambodian genocides. Aren’t we supposed to remember atrocities of the past so we don’t repeat them? Well, memories are short, family chains are broken, new worries eclipse the old ones, and the lessons of the past fade into ancient history only to be forgotten.

Today, the vaccinated seem to enjoy all the rights + privileges of a civilized society: freedom of movement, access to education, and the approval of governments, law makers, journalists, friends and family. Vaccination is the ticket to a CONDITIONAL return of our right to participate in Canadian society.

But as John F Kennedy said: “The rights of every man are diminished when the rights of one man are threatened.”

I have no doubt that COVID-19 is the greatest threat to humanity we have ever faced; not because of a virus; that is just one chapter of a much longer, more complex story; but because of our response to it.

And that response is, I believe, earning its place in every medical ethics textbook that will be published in the next century.

What can we do?

As Canadian chemist and author Orlando Battista said, “An error doesn’t become a mistake until you refuse to correct it.”

In our world, politeness, ‘getting by,’ ‘flying under the radar’ seem to be the goals. Gone are the 60s revolutionaries, gone are the patriots of early America. We are the victims — and the soldiers — of a pandemic of compliance.

But compliance is not a virtue; it isn’t neutral, and it certainly isn’t harmless.

When Hannah Arendt covered the trial of Adolf Eichmann for the New Yorker in 1961, she expected to find a complex, arrogant, diabolical, perhaps psychotic man. What she found was quite the opposite. She was struck by his “very ordinariness.” He was “terribly and terrifyingly normal,” she wrote, a man who was “just following orders,” as he said over and over again. What she found was what she called the “banality of evil,” the thoughtless tendency of ordinary people to obey orders in order to conform without thinking for themselves.

The dismissive, well-rehearsed messaging of our public health officials has created a highly efficient machine that does not publish its evidence or engage in debate, but only issues orders that we obligingly follow. With the help of the media, its mistakes are hidden, its policies unquestioned, its dissenters silenced.

How do we break this silence? How do we regain our sanity and rebuild our democracy? Perhaps it’s time to get a little bit noisy. Studies have proven that once an idea is adopted by just 10% of the population, this is the tipping point when ideas, opinions, & beliefs will be rapidly adopted by the rest. A vocal, a **NOISY** 10% is all it takes.

Democracy, “rule of the people,” doesn’t just allow for freedom of expression and inquiry; it requires it.

As Margaret Mead said: “Never doubt that a small group of thoughtful, committed citizens can change the world; indeed, it’s the only thing that ever has.”

In other words, you don’t need a TRIBE of heroes, a MASS of heroes, a COUNTRY of heroes. You only need 1. You can do your part and you CAN make a difference. The Southwest Airlines pilots, the Canadian Mounties, the University Health Network nurses are all making a difference.

And the FAVOUR I have to ask you? We need heroes now more than ever. Our democracy is asking for volunteers … Will you be a hero, for our country, for our children? Will you be part of the noisy 10%?