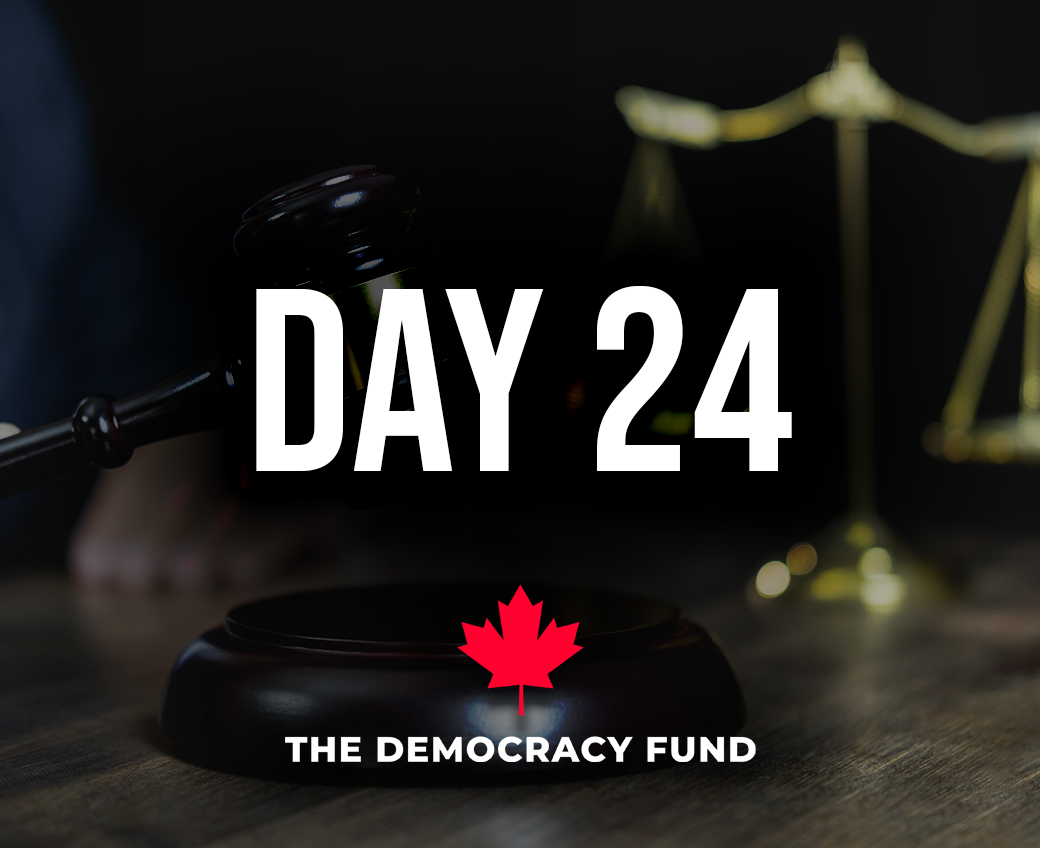 The commission returned after a late session the previous night to hear testimony from John Ossowski, retired President of the Canada Border Services Agency (CBSA). He was president of CBSA at the time of the protests.

The CBSA regulates entry into Canada but does not have the power to arrest people outside ports of entry. He said that CBSA had a program set up to check for the vaccination status of trucker drivers.

He was shown a CBSA chart for February 8 to 13, 2022, showing traffic on various border crossings. It showed a drop in traffic during blockades at the Ambassador Bridge but an increase at the Blue Water Bridge and Peace Bridge. He claimed that the decrease from Ambassador Bridge was not fully compensated at other crossings. He said a portion of the traffic was absorbed by other crossings but declined to say “most.” He agreed that other ports of entry - besides Southern Ontario - were successfully able to divert traffic.

He said for the Ambassador Bridge, there were some supply chain disruptions, given that Blue Water Bridge has less capacity. This had implications for the automotive industry and the “just in time” inventory processes.

He agreed that the CBSA had no authority to procure tow trucks. However, CBSA could have waived some immigration requirements to facilitate entry of tow truck operators. This occurred in Windsor. He was shown notes of a briefing with Prime Minister Trudeau and the Minister of Safety, where he was asked by the Prime Minister about what is being done to prevent further disruptions: he advised that only 3 ports of entry were blocked and one further attempt was prevented. On February 13, 2022, the Prime Minister asked about the Ambassador Bridge blockade but was given no definitive timeline for clearance; the next day, however, the bridge was cleared.

He was asked about “other options” to clearing border crossings - for example, the trusted trader, trusted traveller, and Nexus programs. He said CBSA dismissed the trusted trader program because of joint administration with the US. He only provided advice on administering the border and testified that he did not play a role in invoking the Emergencies Act. He was not asked for his advice on its invocation he only identified gaps in border crossing legislation and tools. For example, he said CBSA could not turn away a foreign national who wanted to participate in a peaceful Canadian protest. He said CBSA did turn away people they suspected were coming to participate in the protest, but only because they did not meet other requirements (e.g.: lack of vaccination).

He said, as of February 14, 2022, in a Bluff Report, that the overall threat to CBSA and infrastructure was low: RCMP had not identified any violent plot. However, later in the day on February 14, 2022, there was a note in the Bluff Report that there was a “significant operational impact that may result in a threat to Canada’s economic security and prosperity.” He said that this addition was made by CBSA agents to the Bluff Report: it was not tacit support for the declaration of the Emergencies Act.

He agreed that, throughout February 2022, all the Bluff Reports stated that the threat to CBSA and infrastructure remained low.

He was shown a note that mentioned reporting on possible IMVE, on February 15, 2022. He agreed that it was only a coincidence that the language regarding “significant operational impact that may result in a threat to Canada’s economic security and prosperity” appeared in the February 14, 2022, Bluff Report: it was not an attempt to repeat a government talking point.

He was shown a note from an IRG that stated CBSA has only used the Emergencies Act regulations to turn away 2 foreign nationals attempting to enter the country for the purpose of protesting on February 19, 2022. This was the only time he reported to the IRG.

On cross-examination by the lawyer for the convoy organizers, he said that Canada is part of “Five Eyes” with other western nations. Some of the information gathered under Five Eyes is passed on to the CBSA if it’s relevant to the border. He said the US did not provide the CBSA with any information about a threat to Canada during the protest. He did not relay any such information to the Cabinet about any such threat. Nor did he advise Cabinet about a s.2 CSIS Act threat. He said, though, that only CSIS would provide that information. He was not aware of the name of the law enforcement agency that told the Cabinet of a s.2 security threat.

Ossowski: I’m not aware of who provided that advice.

He was asked if slow-rolls at other neighbouring bridges impacted Ambassador Bridge and confirmed that they did: he claimed that all crossings are interrelated.

He agreed that CBSA agents had discretion in some circumstances to admit or deny entry into Canada. He was not aware if CBSA waived requirements for vaccination for tow trucks during the blockade.

Here is the video.

Former CBSA President John Ossowski on CBSA officers having the capacity to preemptively turn protestors away from border crossings:

“Well, it wasn’t an unlawful protest at that point in time... before the Emergencies Act, right?”#POEC https://t.co/OpamdQG6r1 pic.twitter.com/fVMFcmAsOm

He was cross-examined by the lawyer for the government of Canada and said the service disruptions and suspensions at the borders had impacts beyond the border. He said alternate routes were not always viable options due to load limits. He said there was a “coast-to-coast” dynamic of the blockades. He claimed that there were disruptions after the invocation of the Emergencies Act. He agreed that prior to the invocation of the Emergencies Act, he said there was a power under the ERPA to deny entry of foreign nationals, detain the individual, transfer the individual to police or prepare an inadmissibility report to trigger a hearing at immigration. He said that this would involve delays, however.

"Several disruptive activities continued well after the invocation of the act," says former CBSA president John Ossowski while addressing other protests and slow-rolls near border crossings.

He said, “events like this feed on each other,” and there was an implicit link between the border and the protests. He was shown a report about protesters encouraging those who cannot go to Ottawa to block the border.

With respect to the addition of the line regarding “threats to the economic security and prosperity of Canada,” he said with all the activities that had escalated at the time, they decided to add the line and that it was not tacit support of the invocation of the Emergencies Act.

The commission next heard from a panel of two witnesses: deputy transport minister Michael Keenan, and Christian Dea, chief economist at Transport Canada.

Transport Canada looked at various solutions to deal with truck removal. Mr. Keenan said by February 13, 2022, a solution was still elusive. He said the tow truck drivers felt they were putting their business and safety at risk. He said Transport Canada wasn’t able to figure out a financial incentive to overcome those concerns.

Mr. Dea said that the Ambassador Bridge is an important port of entry for imports and trade. He said the total number of trucks was down 5% in February 2022 compared to February 2021. Trucks that were rerouted suffered increased expenses. There was an estimated economic loss of $45 million loss per day for the blockade.

Prior to the invocation of the Emergencies Act, the deputy minister did not provide a view of the invocation generally but did provide a view of its impact on the tow truck procurement and other issues. There was a suggestion by the federal government that if the province of Ontario wanted the federal government to get involved, the province should declare a provincial emergency. The deputy minister said this was an attempt to be provocative and force the province to get engaged with the Windsor blockade. He said he did not know if that view was articulated to the province of Ontario, however.

On cross-examination by the lawyer for the convoy organizers, the panel members were shown an email from the GM of the Peace Bridge. It complained of processing times before the blockades, including problems with vaccine mandates and ArriveCan. It claimed that many US travellers are unaware of ArriveCan and arrived at the border unprepared. It stated that many elderly people do not have smartphones and are unprepared to complete ArriveCan applications. It stated that further border requirements increased border delays and avoidance. The witnesses were unable to comment on the email.

The witnesses were shown a Statistics Canada study that noted the border blockades had little impact on total trade in February 2022. Mr. Dea said he agreed with the statement. Mr. Keenan said he would defer to the economists of Transport Canada.

The deputy minister was shown a document explaining IMVE with respect to s.2 CSIS Act threats to the security of Canada. He does not recall seeing the document during IRG meetings.

During cross-examination by the government of Saskatchewan, the Deputy Minister agreed that he was not aware of any discussion of the federal Emergencies Act as of February 11, 2022. He agreed that his department began to work on the Emergencies Act around February 10, 2022, as a “track 2” set of options. This was not discussed with anyone prior to the first ministers meeting on February 14, 2022.