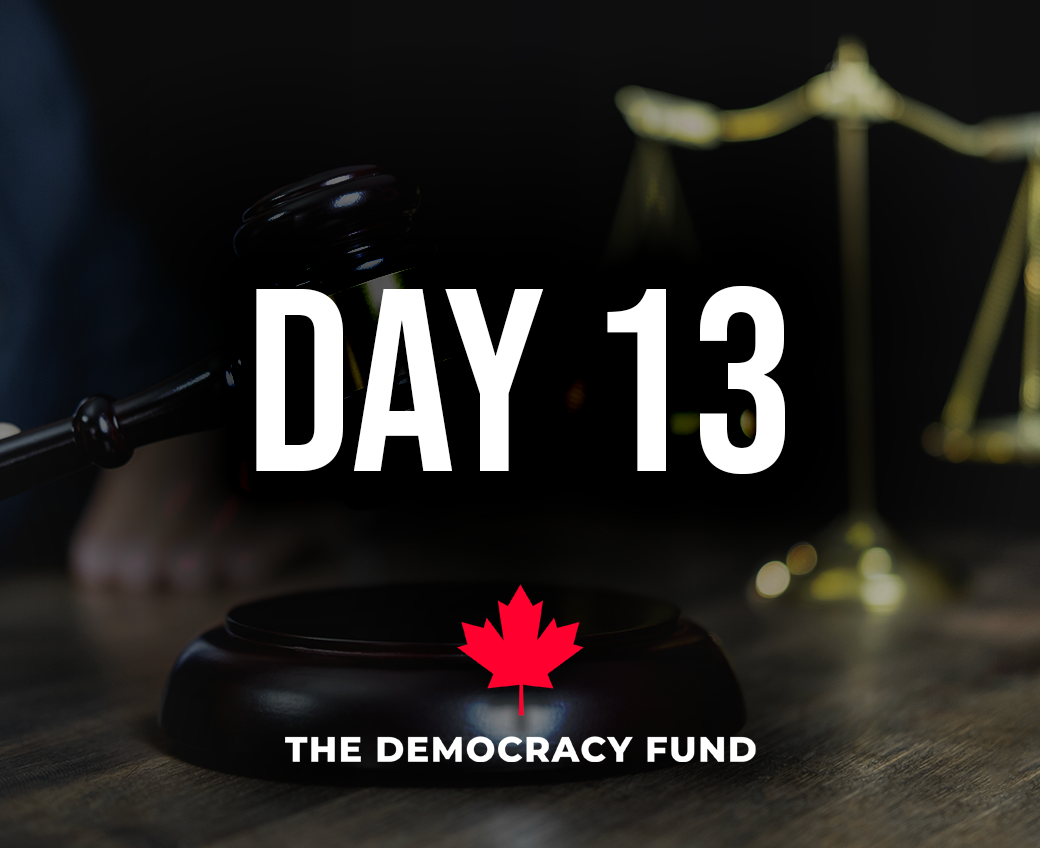 The Commission continued today to hear from Ottawa Chief of Police Sloly. Chief Sloly was head of the Ottawa Police Service (OPS) from 2019 until mid-February 2022.

He stated that he was aware that some individuals in the police force wanted him to fail - a view he expressed to Supt. Pardy. The Commission heard that Chief Sloly had some concerns about the selection of personnel for various positions. He conceded that he was under immense pressure to resolve the problems arising from the protest. Regarding his comments that he would "crush" anyone who does not follow the plan, he said that it was inappropriate. He disputed the notes taken by Deputy Chief Ferguson and denied that he considered resigning earlier in the protest.

When he submitted his OPS-issued cell phone to IT, he had not altered the files stored in any way. However, upon being reviewed in advance of the Commission, there was no remaining record of calls or messages in the phone's storage.

Apparently Sloly returned his phone to OPS when he resigned, then asked for it back several days later, at which time he had his phone wiped.

None of Sloly’s texts during the convoy survived. Sloly blames OPS for not making copies when he gave them his phone. pic.twitter.com/2PD84A4w7m

On cross-examination by the Convoy Organizers, he was asked about his use of the term "assaultive behaviour." He said it was a broad term. He claimed that Criminal Code assaultive behaviour was occurring, but he had no knowledge whether the individuals engaged in this behaviour were part of the protesters. He said that OPS officers were enforcing the Criminal Code but had discretion with respect to laying charges. When asked if he would be surprised to learn that between the start of the protest and declaration of emergency, there were a total of 5 assault charges, he responded that he was unaware of the statistics.

Convoy lawyer Brendan Miller asks Former Ottawa Police Chief Peter Sloly about his definition of “assaultive behaviour,” noting that there were only five charges laid between Jan. 28 and the invocation of the Emergencies Act. #POEC pic.twitter.com/XpucXpn3rD

Chief Sloly agreed that the injunction added an additional tool available to OPS and was a net benefit to public safety. He was relying on the city of Ottawa to pursue an injunction. He testified that Commissioner Lucki did not believe the injunction would be a substantive solution. He was asked if there was a declaration of a riot or unlawful assembly, to which he responded that there was not but that protesters must have been aware that there was illegal conduct at the protest. He agreed, however, that the arson incident turned out to be unconnected to the convoy and that there was extensive misinformation surrounding the protests.

Former Ottawa police chief Sloly finds it "hard to believe" that Freedom Convoy protesters "could not understand there was a level of unlawfulness," despite no official declaration of the protest as an unlawful assembly or riot.

Chief Sloly described Commissioner Lucki's "editorial allowance" in her notes, as they related to him, as "extreme" and added that her notes said more about her than they do about him. He agreed that notes are produced for the purpose of gathering evidence. They are supposed to be an honest representation of events. "Clearly," he added, in some cases, they are not honest.

Chief Sloly suggests Deputy Chief Ferguson’s notes are not an “honest representation” of what happened.

Sloly agrees with the convoy’s lawyer that all her notes are focused on Sloly rather than operational matters: “In my 30 years in policing, I’ve never seen anything like that” pic.twitter.com/MC2LazfcSQ

Regarding the lack of charges laid, he stated that criminal charges alone are not necessarily reflective of the occurrence of crime.

He claimed that OPS had difficulty compelling tow truck operators to participate in towing trucks. He heard about tow truck drivers receiving threats on or around February 4, 2022. He described tow companies as being available but intimidated for various reasons, and, as such, OPS could not access tow trucks predictably. He explained this to his federal partners. He believed it to be likely that enforcement efforts would need to occur, but he could not rule out the potential for successful PLT negotiations.

Regarding the term "tinderbox," he stated there were clearly areas that would not fit this description. He agreed that, on January 29, 2022, there was loud honking, diesel fumes, blockaded streets, and assaultive behaviour along with lawlessness and chaos for businesses. Some residents, he said, experienced harassment and intimidation. He agreed that the OPS would investigate and enforce law-breaking. He said some complaints would not have been investigated due to a lack of resources at the time, but he does not know the details. He agreed that many public officials received threats.

Despite some "genuine people trying to do some genuine things," former Ottawa police chief Sloly thinks the Freedom Convoy gave an "overarching sense" of a tinderbox waiting to explode.

Despite some "genuine people trying to do some genuine things," former Ottawa police chief Sloly thinks the Freedom Convoy gave an "overarching sense" of a tinderbox waiting to explode.

He further agreed that there were problems with "misinformation and disinformation." He was aware of some reports of funds sent to the convoy via GiveSendGo by officers.

It is typical for protesters to have the stated goal of staying long-term. He did not take the position that each convoy had millions of dollars of funding. He disputed the claim that OPS did not take the convoy protest seriously enough.

He took offence to a comment, in a meeting with federal parties and Deputy Minister Stewart, that the OPS was seen to be "helping white supremacists take over Ottawa." He denied that OPS engages in policing differently based on race or colour.

During a call between federal ministers, Ottawa police and local council, Deputy Public Safety Minister Rob Stewart said "OPS seems to be wanting to help a group of extremists and white supremacists take over Ottawa," according to former chief Sloly.
MORE: https://t.co/eIIUIWXU9r pic.twitter.com/d6N7zT0WPI

Chief Sloly testified that he heard Canadian Security Intelligence Service (CSIS) Director Vigneault describe the protest as a national security event during a meeting he attended. He does not believe, however, that CSIS Director Vigneault had formed an assessment about foreign influence at this point.

He stated that he needed approximately 1800 additional officers and heavy towing services. Tow trucks were already present by mid-February. This included between 3 and 5 contractors on the first weekend, though he claimed that this did not increase until his last day (February 14, 2022). He conceded that he was not directly involved in tow truck procurement services and did not know who handled it.

When asked about the test under s.2 of the CSIS Act regarding "threats to security", Chief Sloly conceded that he was not aware of credible intelligence regarding espionage or sabotage. He said he thought there were significant elements of foreign funding based on GiveSendGo funding. He claimed that there may be "some other nations involved." When pressed, he said that he had information that activities were taking place beyond the borders of Canada but that this information was not tested. He was unaware whether donations via GiveSendGo met the legal definition under s.2 of the CSIS Act for foreign influence. He claimed that he knew of some GiveSendGo funds and that some foreign parties may come to Canada. He was not aware if specific HENDON intelligence reports mentioned these donations. When asked whether he had credible intelligence of serious violence, he said there was a wide array of open-course social media posting about threats, but these threats had not been validated or corroborated to his knowledge. Finally, when asked whether he had information as to credible threats to overthrow the government, he said that he did not.

Did the former Ottawa police chief see any "credible intelligence" linking the Freedom Convoy to espionage, sabotage or foreign-influence against Canada?

On re-examination by the Government, he said he had a conversation with Minister Blair during which he said that he towed "hundreds of vehicles and issued thousands of tickets." When asked about claiming that there was no safe way to carry out removals without risking injury or death, he said, "it was a tinderbox," at least on the first weekend. He recalled the "swarming" of police officers. He had concerns about officers resorting to the use of force to prevent being overwhelmed. He said that even requiring minimal compliance would increase the risk of violence. He recalled that one OPS sergeant was assaulted, but he was unsure if a Criminal Code charge was laid.