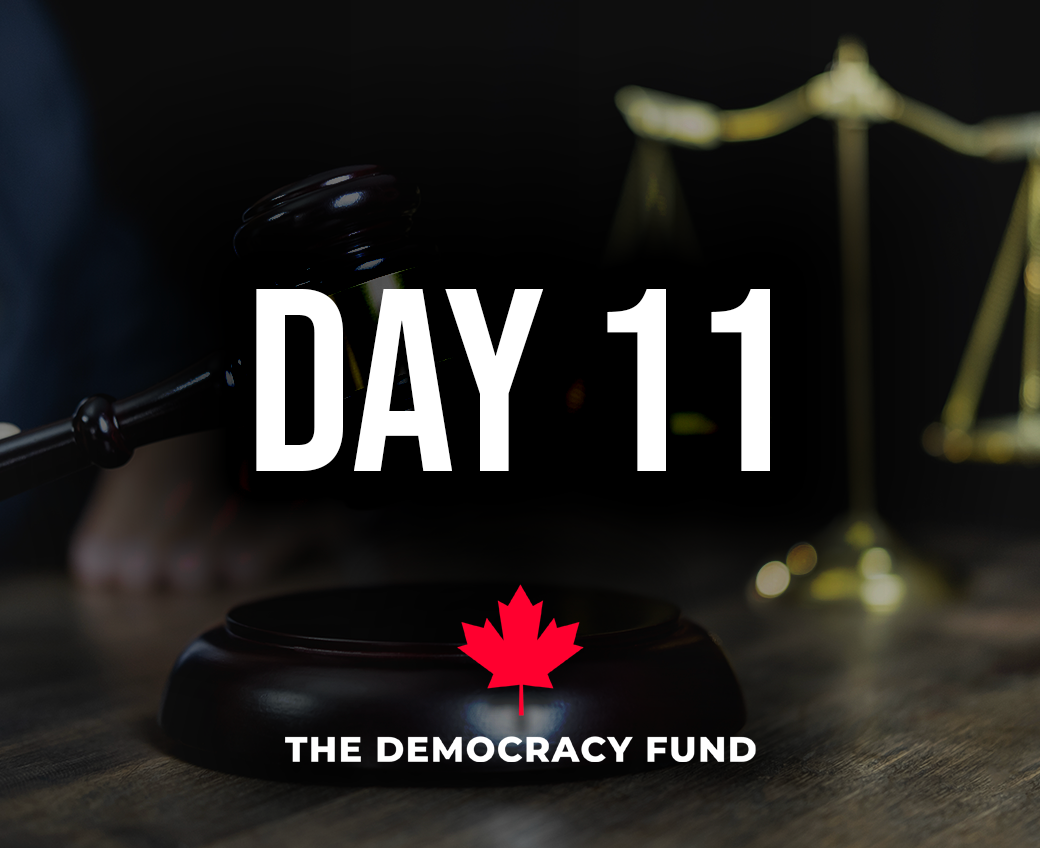 On day 11, the Commission heard from Thomas Carrique, Commissioner for the Ontario Provincial Police (OPP.) He described the support OPP gave to the OPS during the protests. He believed that, by the end of January 2022, the OPS was overwhelmed by the protests. He understood by early February 2022, that the Police Liaison Team (PLT) was not being utilized to its full extent.

Carrique says he made numerous offers of help after that, and felt OPS was not adequately using police mediators, didn’t have a clear plan, and was not working to get an injunction. pic.twitter.com/rHenQePDd3

He testified that there were no reports of criminal activity during the early part of the protest. Commissioner Lucki, in an email to Commissioner Carrique dated February 2, 2022, expressed a lack of confidence in the OPS and indicated that she did not want to be in the lead of implementing the Emergencies Act.

On February 7, 2022, Mayor Watson made a written request to the Federal Government, seeking 1800 additional officers from the Federal and Provincial governments: in the opinion of Commissioner Carrique this request between politicians was unusual. He had concerns that it was made so publicly and politically.

Ottawa Mayor Watson has written a request to Trudeau and Ford for an additional 1800 police officers to deal with the convoy. pic.twitter.com/nNln9nU4xT

Carrique didn’t like how Sloly publicly asked for 1800 cops (this offer went through politicians on Feb. 7). He thinks it told protesters local cops were overwhelmed and could have created problems for other police jurisdictions seen to be pulling resources to Ottawa. pic.twitter.com/EAlksNUgVD

Commissioner Carrique denied that he was under political pressure to respond to requests for policing and staffing.

As of February 4, 2022, the city of Windsor had "requested assistance" with respect to the Ambassador Bridge, but there was no formal request to the OPP. The Commissioner testified that financial security must be looked at in a national security context: it is a significant economic impact that affects quality of life. It is one factor that needs to be considered among all other factors. He stated that he believed that the protests in Windsor and Ottawa were intentionally and "surgically" designed to challenge police capacity.

In texts between Commissioner Carrique and Commissioner Lucki, Commissioner Lucki stated that, on February 5, 2022, she was experiencing difficulty trying to calm federal cabinet ministers who were seeing "cranes, structures, horses, bouncing castles in downtown Ottawa."

He suggested that all of the protest events had to be managed together strategically. He said that the February 17, 2022, HENDON report mentioned that the protest was a potential national security threat, but this was different from defining a threat under s.2 of the CSIS Act. He stated that the HENDON reports are designed for strategic policing purposes. He noted that Supt. Morris is the foremost subject matter expert in the province on intelligence and agreed that there were no "credible" threats to national security.

He conceded that by February 13, 2022, police services had a viable plan to clear protests.

On February 11, 2022, a plan to draft a letter to the protesters was crafted by OPP Deputy Commissioner Rose DiMarco. Commissioner Carrique agreed that this was a good idea. He was the point of contact with the government on the letter.

That same day the injunction came into effect, and a provincial emergency was declared. He acknowledged that the letter did not have the desired outcome, nor did the injunction.

"My understanding was that there were some of them that were reluctant. There may have been some that were refusing to assist."

When asked if he lost confidence in the ability of the OPS to manage the situation, he stated that the OPS required the assistance of the OPP to succeed.

WATCH: When asked if he had "lost confidence" in OPS' ability to manage the situation, OPP Commissioner Thomas Carrique claims, "They needed our assistance to succeed...I certainly wouldn't describe it as that way."

He was shown an email sent by Commissioner Lucki, dated February 13, 2022, where she wrote that she did not believe that invoking the Emergencies Act was necessary. Commissioner Carrique stated that he agreed.

Additionally, he stated that the OPP did not have to rely on the Emergencies Act to compel tow truck operators, however.

He conceded that the powers under the Emergencies Act might be more effective in some areas than under common law or EMCPA powers.

When shown emails about other areas in which police were concerned about the eruption of violence due to protests, he said that it all informed his thinking about threats to national security and the need for coordination. Counter-protests were a concern. However, he stated that at no point did he ever call for the deployment of the Canadian Armed Forces.

Watch as a government lawyer asks if OPP Commissioner Thomas Carrique wanted to send in the military to quash Freedom Convoy protesters in Windsor and Carrique completely denies the accusation.#POEC pic.twitter.com/EMbDFlu5NK

Commissioner Carrique agreed that it was appropriate for police to collect data on groups like "the White Lives Matter movement, Patriot's movement, anti-government activity and extremist entities."

The OPP commissioner agrees that it was appropriate for police to collect data on groups like "the White Lives Matter movement, Patriot's movement, anti-government activity and extremist entities engaged in anarchism, environmental issues, etc."

Despite his earlier testimony on the issue of the protests constituting a national security threat, on cross-examination, he agreed with the testimony of Supt. Morris that, to his knowledge, there was no credible threat to the security of Canada as determined by Supt. Morris, in consultation with CSIS and RCMP.

Commissioner Carrique stated that no civil servant ever said to him that there was a reasonable basis for a credible threat to national security.

Commissioner Carrique stated that he was unaware that no charges for unlawful assembly were laid.

He further testified that WPS did not have experience handling large protests, unlike Toronto and Ottawa. He classified the Ambassador Bridge protests as a large protest. He agreed that, on February 12-13, during a two day operation, WPS, in conjunction with other police services, was able to clear the blockade at the bridge. He agreed that the Ambassador bridge opened for traffic on the morning of February 14 (before the invocation of the Emergencies Act) and was fully operational on February 15. The plan used by police services did not refer to or require the Emergencies Act. He acknowledged that police services cleared another blockade at the Blue Water bridge prior to the invocation of the Emergencies Act.

When questioned by Commissioner Rouleau, Commissioner Carrique admitted that the 'surgical coordination' between Windsor and Ottawa, he claimed in his earlier testimony, was just his personal belief and further that police had the power prior to the invocation of the Emergencies Act to clear any roadway in Ontario.