The History of Civil Liberties in Canada with Dr. Jordan Peterson 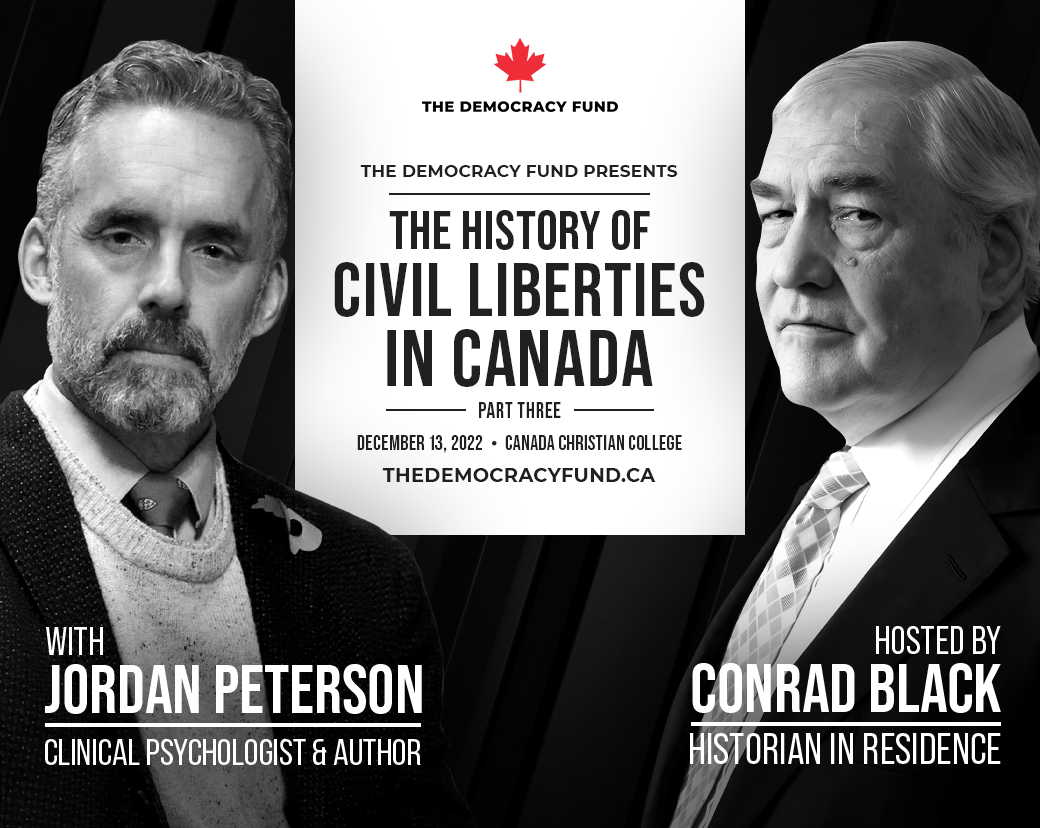 In the latest installment of our series, The History of Civil Liberties in Canada, with The Democracy Fund's (TDF) Historian in Residence, Conrad Black, we will be featuring the acclaimed guest speaker, Canadian media personality, clinical psychologist, author, and professor emeritus at the University of Toronto, Dr. Jordan Peterson.

Conrad Black and Dr. Peterson will discuss the topic of civil liberties in Canada from both a present-day and historical perspective focusing on the issue of constitutional rights and freedoms in Canada.

The third installment of this series will take place on Tuesday, December 13, 2022, with the main event starting at 7:00 P.M. ET at Canada Christian College, located at 300 Water Street in Whitby, Ontario.

TDF is offering guests different ticket options to select from. Available ticket packages include the following:

General admission for the main event, seating in sections 3 and 4. Reception, dinner and online attendance not included.

Includes pre-event wine and cheese reception, and photo with Dr. Peterson, offering the opportunity to mix and mingle with prestigious guests, such as Conrad Black himself, Dr. Julie Ponesse, and TDF's legal team. Ticket package also includes in-person general admission to the main event with preferred seating in section 2. ($100 of the ticket cost is tax-deductible.)

Includes exclusive access to pre-event VIP reception, preferred seating in section 1 for the main event, and access to the exclusive post-event dinner. The dinner will provide the opportunity to intimately converse with Conrad Black, Dr. Jordan Peterson, and Dr. Julie Ponesse over a 3-course meal. ($600 of the ticket cost is tax-deductible.)

You won't want to miss this one-of-a-kind series! Remember, space is limited, so purchase your tickets today!

Raised in Alberta and a long-time resident of Toronto, Dr. Jordan Peterson has become the most recognized academic in the world. Dr. Peterson is well known for his defence of free speech and objection to coerced language. In 2016, Dr. Peterson rose to unprecedented international prominence as a public intellectual and educator.

Dr. Peterson is a clinical psychologist and professor emeritus at the University of Toronto. From 1993 to 1998, he served as an assistant and then associate professor of psychology at Harvard.

Through his best-selling books and media appearances, Dr. Peterson has impacted humanity significantly. His YouTube channel has almost 6 million subscribers, and he regularly hosts fascinating discussions with lead intellectuals worldwide.

Conrad Black is a financier and an esteemed columnist, writer, and radio and television commentator who is well known for creating a media legacy and one of the world's largest newspaper companies, Hollinger International. He was also the founder of Canada's National Post and has written books on Canadian and American history, as well as acclaimed biographies of figures such as former premier of Quebec, Maurice Duplessis, and US presidents Franklin D. Roosevelt, Richard Nixon and Donald Trump.