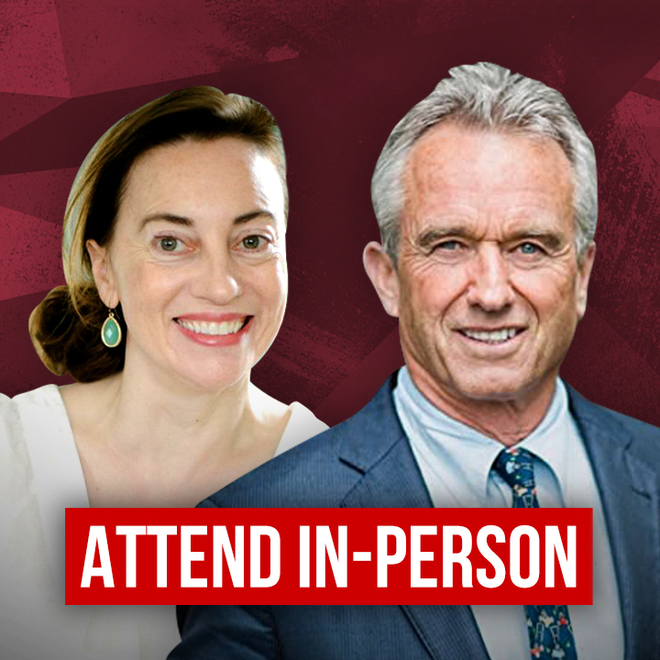 Robert F. Kennedy Jr. was our guest of honour at our town hall meeting on Thursday March, 31, 2022.

Robert F. Kennedy Jr. is a political icon — for more than half a century he’s been a civil rights activist, crusading lawyer and a senior political statesman in America. He carries on the tradition of his father, Bobby Kennedy, and his uncle, John F. Kennedy, who shaped a generation of liberal thinkers.

So it’s no surprise that RFK Jr. has been one of the leading voices against lockdown extremism and one of the most effective critics of the merger between Big Pharma and Big Government.

To open the event, Rebel News founder Ezra Levant shared his insights on current mainstream headlines. Then RFK Jr. joined Dr. Julie Ponesse, our Pandemic Ethics Scholar at The Democracy Fund, for a wide-ranging conversation about the pandemic, touching on everything from vaccine mandates to the failures of Big Pharma to the propaganda of the news media.

The conversation was held in the high-tech auditorium of the Canada Christian College in Whitby, Ontario, half an hour east of Toronto, and RFK Jr. appeared via video link on a huge, 50-foot LED screen. There was also the option to attend via Zoom link.

Dr. Julie has become a fan favourite for her articulate, passionate defence of ethics in this time of crisis. To be able to watch her and the great RFK Jr. in conversation was illuminating and inspiring.

Four of these town hall events have taken place in 2021, and they’ve been amazing. This one was one of our most important events yet — and a symbol of hope that people across the political spectrum — from conservatives to die-hard liberals — can find common ground in civil liberties and free debate!