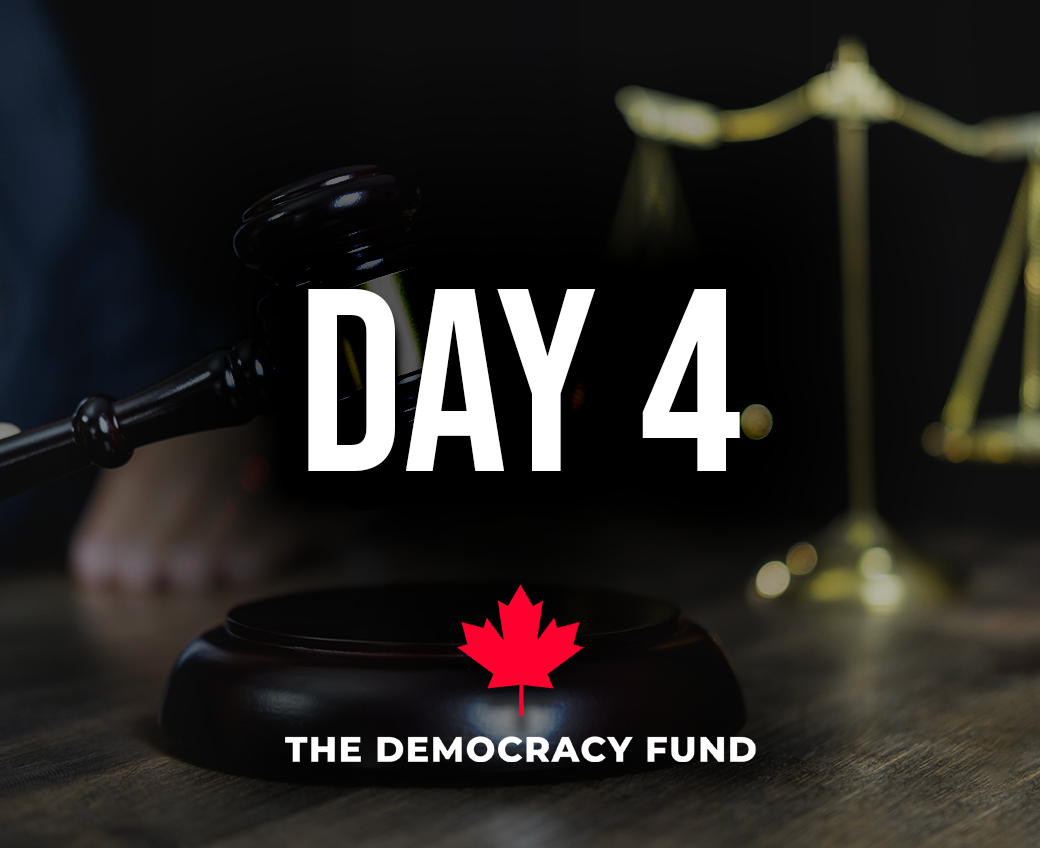 On Tuesday, October 18, Ottawa Mayor, Jim Watson, testified before the Public Order Emergency Commission. He discussed the city's need for more resources as it attempted to deal with the influx of protesters and parked vehicles. Mayor Watson raised the idea of a mediator with Minister Mendicino, but he was informed that the federal government was not interested in appointing a mediator. Mayor Watson was not told the reason for this lack of interest. When asked why the city didn't hire a mediator, he answered that the protesters were there to protest the federal government mandate. When asked whether the protesters lived up to the agreement to move trucks, Mayor Watson agreed that they did. He noted that the invocation of the public order emergency put a stop to that.

Although Mayor Watson claimed that there were incidents of violence and "tearing off masks" by protesters, on cross-examination by The Democracy Fund (TDF) Litigation Director, Alan Honner, Watson conceded that he had not witnessed any acts of violence and only heard media reports that masks were torn off.

TDF's Litigation Director Alan Honner asks Ottawa Mayor Jim Watson if he has any personal knowledge of any violence that took place during the Freedom Convoy.

Although representatives of the provincial government met with protesters in Windsor, Mayor Watson did not know if provincial representatives offered to meet protesters in Ottawa. He described the city's frustration at its inability to clear the streets of vehicles, stating that there was a lack of tow truck operators willing or able to assist. On cross-examination, Mayor Watson said that he was unaware that the Emergencies Act would grant powers compelling tow truck operators to assist. However, he claimed that after the declaration of the emergency, the tow trucks were compelled to assist. He could not, however, confirm that the emergency declaration was the cause. He said that the city was facing an issue with policing resources but claimed that as a matter of policy it was inappropriate for him to contact the head of the Ontario Provincial Police to ask for more resources.

Ottawa's General Manager of Emergency and Protective Services, Kim Ayotte, testified in cross-examination that protesters were concerned about maintaining safety lanes and kept safety lanes open at all times during the protest.

Freedom Convoy organizers were not only concerned about, but kept open emergency lanes on roads, allowing first responders access according to Kim Ayotte, Ottawa's general manager of emergency and protectives services.

Additionally, in cross-examination, Mr. Ayotte testified that the relocation agreement reached between the City of Ottawa and the protesters was not perfected "because of the police."

WATCH: Ottawa police quashed a deal between the Freedom Convoy and the City of Ottawa that saw trucks being relocated from the downtown core, Kim Ayotte, Ottawa's general manager of emergency and protectives services confirms.