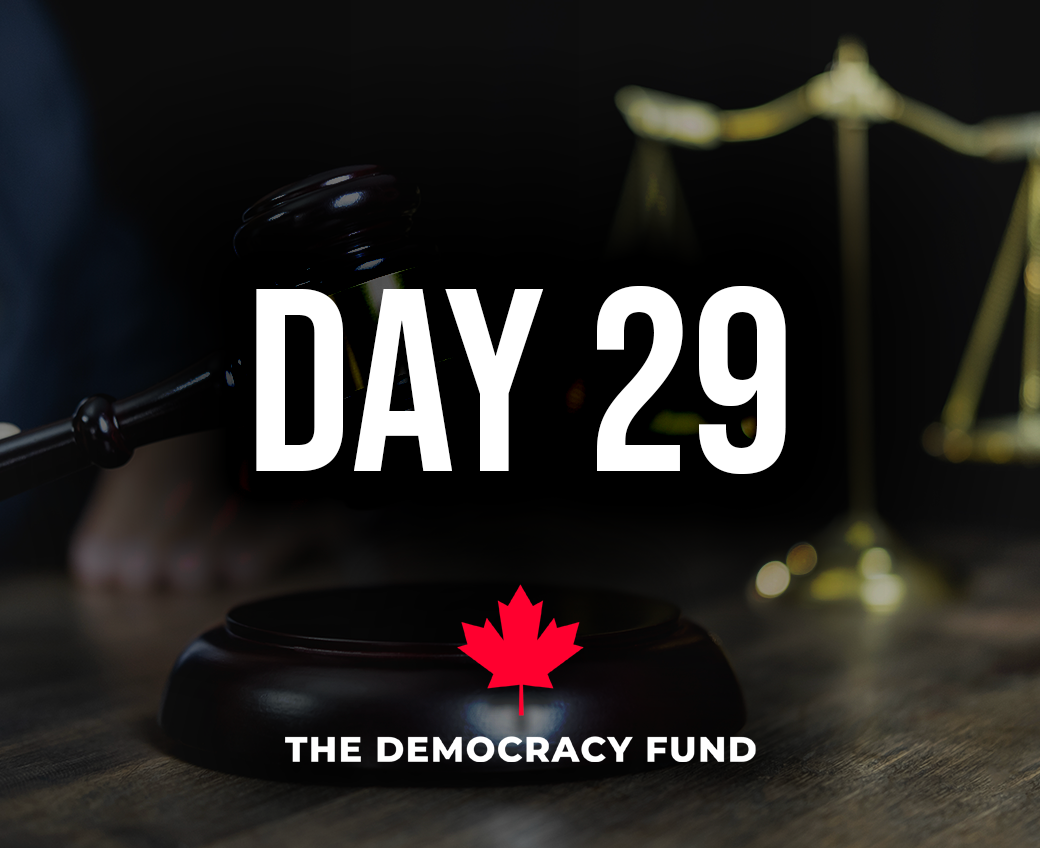 The commission then heard testimony today from the Minister of Justice David Lametti. He confirmed that the Attorney General of Canada is the legal advisor to Cabinet. He said he was forced out of his residence in Ottawa because he felt unsafe and “escaped” to Montreal. He recognized that the government should not direct police forces. However, he was shown texts between Minister of Public Safety Mendicino and himself wherein he tells Minister Mendicino that “he needs to get the police to move.”  He said, however, that he was not the person interacting with the police. He said he was articulating his priority as a member of the government.

He said that the text message referencing the provision of a tank to deal with the protest was “bad humour.” He said CAF was the last resort.

It was suggested to him that Parliament, in drafting the Emergencies Act, could have used other language but chose to reference the CSIS Act definition of “security threat”: he agreed. He said that definition was a “starting point.” He said, however, that Parliament did not delegate the decision-making authority to CSIS. He said that CSIS uses the definition for a different purpose: to initiate an investigation. He claimed that the definition is much wider for Cabinet. He disagreed that the substantive standard is the same for Cabinet and CSIS: he said the threshold has evolved. He was asked if s.16 and 17 of the Emergencies Act created a subjective and objective test, where Cabinet must have a belief that there was a security threat and this belief may be reasonable. He agreed to this.  He agreed that, under s.58, the government must provide a reasonable explanation for the declaration. He said the explanation included the reasons for the government’s invocation upon which it relied at the time. He relied on solicitor-client privilege to protect Cabinet regarding the reasons they arrived at the conclusion. He said the commission will find the factual basis for the invocation in the s.58 explanation.

Attorney General and Minister of Justice David Lametti gives us his very special take on the threshold for invoking the Emergencies Act.

“There’s been an evolution of the [Emergencies] Act.”

Umm, when was that again? Since it worked for them? #POEC pic.twitter.com/8rmsk7PywL

“The [legal] threshold as applied [to invoke the Emergencies Act] as you’ve seen in testimony before this commission has evolved. The rules of thumb for interpreting that have evolved.”

On cross-examination by the lawyer for the convoy organizers, he was asked about the advice of Ms. Thomas but refused to comment on it. He was asked about the existence of any document that suggested that there was a broader scope of s.2: he relied on solicitor-client privilege and declined to answer. He was asked if it was his personal belief that s.2 of the CSIS Act had a different scope than it had in the Emergencies Act.

He mentioned that he had concerns for his staff and feared for his safety. He claimed that he could see harm to Ottawa residents himself and did not need CSIS to tell him this.

He was shown a Hansard comment stressing the importance of the CSIS Act definition. He was told that the CSIS Act had a double test but declined to offer an opinion.

On cross-examination by the lawyer for TDF, he was shown a text where he said, “we needed to stay ahead of the NDP, and senators were saying that they would vote against [the EA] based on their view that there was no longer an emergency.”  He was asked if he would have kept the Emergencies Act in place, but of the threat from the NDP and senators: he denied this.

Texts from Justice Minister Lametti:
“We needed to stay ahead of the NDP and senators were saying that they would vote against [the EA] based on their view that there was no longer an emergency.”#POEC pic.twitter.com/yAQ2d4P22K

On cross-examination by the lawyer for the CCLA, he agreed that it was part of his role to assess the constitutionality of the application of the law. He agreed that the determination of a national emergency was a political one: he said that was a decision made by political actors. He agreed that the Emergencies Act had the potential to restrict rights but said it must be Charter-compliant. He claimed that protesters always had the option to protest legally while not blocking traffic.

He agreed that the financial institutions were given to freeze assets. He said the Orders contemplated that donors could have their bank accounts frozen.

Commissioner Rouleau asked Minister Lametti how the commission is supposed to evaluate reasonableness. Minister Lametti said that s.58 explanation provided reasons, and the government will provide the legal interpretation in submissions. He was asked about the belief of the people who made the decision and was told the commission should assume they were deciding in good faith.

Justice Rouleau: The answer is we just assume they [the government] acted in good faith in the application of... whatever they were told [regarding the legality of invoking the EA]? Is that sort of what you’re saying?

The next witness was Anita Anand, the Minister of National Defence. She claimed that the CAF was only to be used as a last resort. She said she was focused on the intelligence she was receiving from experts. She said she was concerned for her safety and the safety of her staff. But she said her decisions were informed only by the experts giving her information. She said she received information from the RCMP or CSIS through reports given at the IRG and Cabinet.

Minister Anand was cross-examined by counsel for the JCCF. She claimed that she agreed with the invocation of the Emergencies Act. She disagreed that Cabinet solidarity prevented her from publicly criticizing a decision of Cabinet without resigning.

She claimed that the “tank comment” was made in jest. She also said the CAF did not consider deploying tanks. She said all her colleagues take their jobs seriously. She was asked if this kind of joke was considered funny. She was asked if the National Defence Act was a law of Canada: she agreed. She was shown the provision in the Emergencies Act requiring the unavailability of other Canadian laws but declined to say if CAF forces should have been used prior to the invocation of the Emergencies Act.

The Minister of Transportation, Omar Alghabra, gave evidence in the afternoon. He said that, given the impacts of the protest across Canada, it “felt like an emergency.” He said the tow truck situation was never resolved prior to the invocation of the emergency and that the tow trucks did not appear until afterwards. He said cities, municipalities, governments, businesses, and associations representing different industries were asking them to do something. He said it was not something they took lightly: “the fear of escalation, the fear of it getting out of hand.”

"Yes, the Emergencies Act is for emergencies" and the Freedom Convoy "felt like an emergency," says Transport Minister Omar Alghabra.

Alghabra says he was "reluctant" to see the act invoked, "but it was the right thing to do."

On cross-examination by counsel for the JCCF, the Minister declined to comment on whether the elimination of the trucker vaccine mandate was due to the protests. When asked if tow trucks sympathetic to the protests were compelled under the Emergencies Act to provide services contrary to their Charter rights, the Minister refused to directly answer the question.

Despite the Emergencies Act compelling these drivers to remove the Freedom Convoy, Alghabra says Charter rights were respected.pic.twitter.com/M41neXlTKT