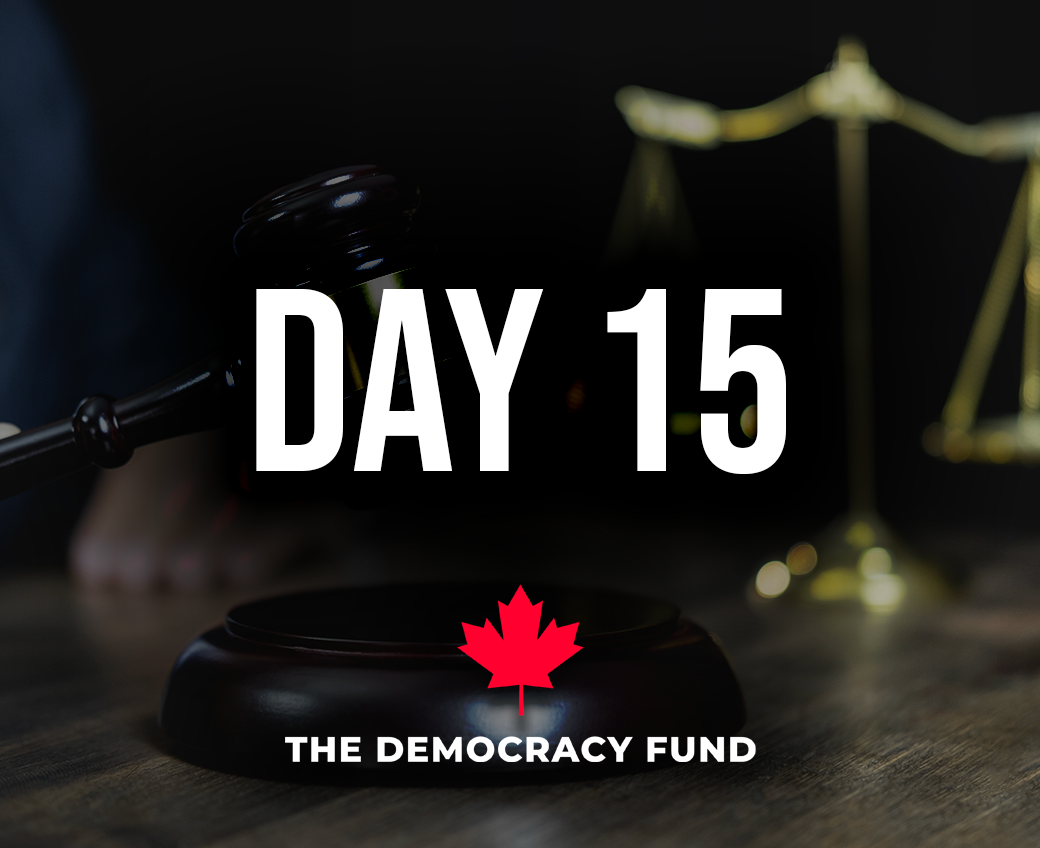 He stated that he never expected his government to use this level of force on a peaceful protest.

Convoy lawyer Keith Wilson on the danger protesters faced by returning to the red zone when enforcement action began:

"I'm a Canadian and I would have never imagined that our government, our federal government, would use that level of force."

He told organizers he would not be in the same room as Pat King, given his alleged use of violent rhetoric. On at least one occasion, he left the room when Pat King entered. He condemned talk of violence from Pat King or anyone else.

He was asked about free speech rights and zoning by-laws. He agreed that parking a truck in a no-parking zone can have legal consequences, and he advised people of this fact. He stated that Ms. Lich and Mr. Barber did not endorse the sounding of horns during all hours. He testified that he was told Antifa was threatening to commit violence and that Antifa did, in fact, vandalize convoy vehicles.

He said that the funds raised through donations were a symbol and a way for other Canadians to support the protesters, a respect for the Charter and a return to the rule of law. Additionally, he said there were so many people wishing to donate fuel that fuel suppliers had to create a waiting list.

Convoy lawyer Keith Wilson tells a story of someone who wanted to buy fuel for truckers and was put on a "waiting list" because so many people across the country were doing the same. pic.twitter.com/2ZAzUbVmn3

Mr. Wilson testified that his clients were not supportive of talk of violence. He said that the protest was composed of members of all different backgrounds and ethnicities. He said the protest was peaceful but added that it was normal, in a group of 5000 to 8000 people, for some people to engage in some criminality.

He testified that, despite miscommunications, he and the truckers were working with the city of Ottawa on a deal for truckers to relocate. He confirmed that over 100 vehicles were moved from Wellington Street, including at least 23 trucks, but possibly as many as 40. He anticipated some holdouts but expected them to move eventually. He conceded that controlling all the individual protesters was impossible.

WATCH: When questioned about hate speech from supposed truckers, Keith Wilson responded, "I find the PM's hate speech towards unvaccinated people and saying 'how do we deal with these people' deeply troubling."

He recalls flyers placed on the windshields of vehicles warning of consequences for failing to leave the area. He stated that these were being distributed by the PLTs.

He explained that the freezing of bank accounts adversely affected protesters, for example, when shopping for groceries. He recounted that banking representatives said that these people would have their bank accounts "flagged for life."

Questioned by Commissioner Rouleau, he said there was no designated protest area. He was always being asked by PLTs about an exit strategy, but there was no offer from the PLTs for this. He did not ask for a specific protest area.

Justice Rouleau asks convoy lawyer Keith Wilson if there was an area set up so that the protest may continue (presumably in a “lawful” manner).

He had asked this question several times now throughout the inquiry, and the answer has always been the same.#POEC pic.twitter.com/R6olq4D6Fw

Tom Morazzo was the second witness of Day 15. He stated that he was asked by James Bauder to join the convoy organizers at the Arc Hotel in Ottawa. He was motivated to go to Ottawa by his fear of the powers used by police and government during the COVID-19 pandemic. He kept expecting dissenting lawyers or doctors to get involved in stopping mandates, but this never materialized. The trucks, however, did get involved. He conceded that sometimes emergency lanes were not kept open on Rideau, Sussex and Kent, but he came to realize that the city of Ottawa had large equipment and barriers blocking the lanes, which complicated this. When lanes were blocked, he said that he had his people personally speak to truck drivers to have the trucks moved. However, at times, police would "trick" truck drivers into moving trucks and then fill the spaces with police vehicles.

Tom Marazzo, one of the convoy organizers, recalls his reasons for heading to Ottawa and joining the demonstration.

"It was the truckers that gave me an opportunity to actually get into fighting for my kids' rights."

Mr. Marazzo understood the importance of leaving emergency lanes open, so he drafted a map for organizers to use for this purpose. His focus early on was logistics: food, fuel, money, and emergency lanes. He understood that fuel was being transported to trucks in jerry cans. He added that he did not organize fuel to be brought to truckers because it was occurring organically.

He testified that he read the MOU and stated that it was not well-written: he did not believe it was written by a lawyer. Mr. Morazzo recommended that the MOU be retracted. He said it misstated the purpose of the convoy. He did not think it was credible or appropriate. In a video of a press conference, he disavowed violence and called for a meeting with the political parties. He clarified that he was seeking dialogue with the government. He said that to this day, the government has not spoken to the convoy protesters or organizers.

Mr. Marazzo stated that he was also involved in negotiations with the city to remove trucks from Sussex.

He said it was not clear whether protesters were permitted to be on foot in the red zone after the declaration of the Emergencies Act. He was aware of a legal opinion that suggested that people may be arrested if they remained after the public order emergency declaration.

Mr. Marazzo said he understood, from statements by Minister Blair, that he would be identified and "charges will be coming (his) way." This caused him to be fearful. He encouraged people to leave after February 19, 2022, after he witnessed the violence used by police against protesters. He said he had a conversation with the Ontario Provincial Police (OPP), asking that they remove the barriers and provide fuel so the truckers could leave.

He stated that all of his bank accounts were frozen, including joint accounts and his credit card on file with his son's pharmacy. He noted that his son has myocarditis and requires heart medication. He had no access to funds other than cash. He added that his ex-wife was contacted by her financial institution and "cautioned": he had been divorced from her for 10 years at that point. Finally, he was given no warning about the freezing of his accounts.

Pat King was the final witness to provide evidence. He has been charged with criminal offences and has bail conditions restricting him from social media use. He testified that he was also involved in the Rolling Thunder convoy that travelled to Ottawa.

And this was after Pat King spent five months in pretrial detention. On non-violent mischief related charges, obstruction, etc. @JustinTrudeau’s Canada looks a lot like that basic dictatorship he so admires. #DictatorTrudeau pic.twitter.com/LiMQ0tkHIV

He became aware of the freedom convoy due to his knowledge of the importance of the trucking industry to the Canadian economy. He felt that the mandates were an attack on truckers. He spoke to Chris Barber and decided to get involved since he believed it was an important issue and he had been in a convoy before. He understood that the goal of the convoy was to exercise free speech rights and to be heard by politicians.

He was asked about an older video he made where he mentioned resolving things with "bullets." He said it was "taken out of context" and that the video was "created to defame him." He was confronted with previous racist and violent statements. He attempted to explain these statements and testified that they also were "taken out of context." During a heated exchange with the lawyer representing the residents of Ottawa, Mr. King claimed that his bank account was frozen and that the people in Ottawa do not like people who speak out. After an outburst from an audience member, Commissioner Rouleau cleared the room to establish order.