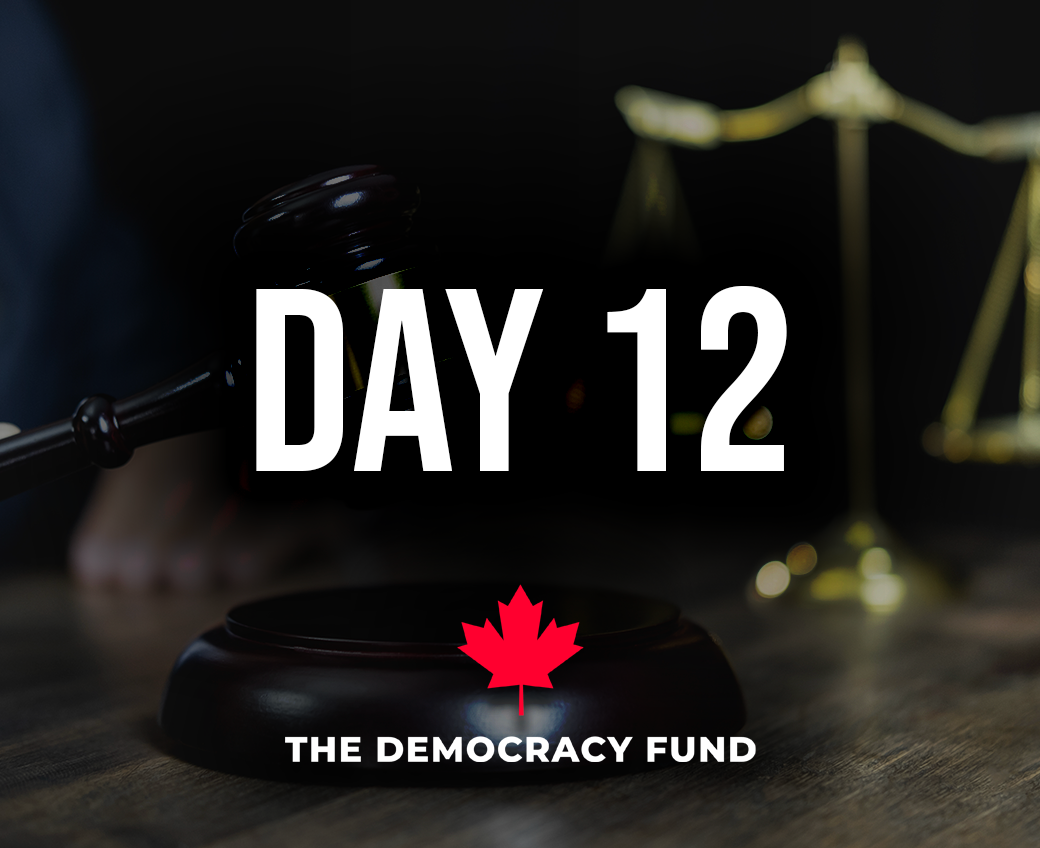 On day 12, the Commission heard from former Ottawa Chief of Police Sloly. Chief Sloly was head of the Ottawa Police Service (OPS) from 2019 until mid-February 2022. During his tenure, he managed OPS policing during the global COVID-19 pandemic, the BLM and the ‘Defund the Police’ movement, the George Floyd event, and an internal corruption investigation. He noted struggling to fill senior positions. He was tasked with making significant changes to the OPS culture, HR structure and policing processes during a difficult time.

He first read about the freedom convoy on January 17, 2022. He viewed it as a potentially significant event, and he forwarded it to Deputy Chief Bell and acting Deputy Chief Ferguson for the intelligence and operational assignment. It was his understanding that the protest was going to be a weekend event, with some protesters possibly remaining during the week. He received no intelligence that the protest would be violent. He knew from past events with broad community involvement that it had the potential to be a large-scale event, however.

Chief Sloly became concerned when he discovered that the protesters could be transporting heavy equipment. Most of the heavy equipment, however, did not arrive at the downtown core, and some of the equipment that was reported to have made it to the core did not actually do so.

He stated that this was a national event that originated in western Canada and spread to other parts of the country. However, the intelligence and risk assessment primarily came from the Ontario Provincial Police (OPP) rather than federal partners. He identified this as a structural gap that needed to be remedied. He did not believe that OPS had the authority to deny public access to the downtown core, though it could close roads if there were safety concerns. He agreed that OPS had a legal opinion made available to it on January 28, 2022, which stated that there needed to be a balance between Charter rights and public safety. This legal opinion, he claimed, however, arrived in the middle of the event when protesters had already arrived in the city: this rendered the legal opinion helpful, but not instructive.

He claimed that OPS incorporated the aforementioned legal opinion into the operational plan. Police Liaison Teams (PLT) made agreements with protesters to alleviate impacts (i.e. keeping emergency lanes open, and moving trucks out of residential areas). He understood that the Windsor convoy was the first to arrive in Ottawa and occupied most of the so-called ‘red zone’ near Parliament. The traffic control plan subsequently collapsed, additional resources were deployed, and many other convoy participants attempted to enter the downtown core area. OPS took active steps to close roads as the convoy drove toward Ottawa. They deployed the PLT who engaged with protesters as western convoys crossed Manitoba. Chief Sloly understood that 3000 trucks would move into designated areas and not block emergency lanes. By January 29, 2022, Chief Sloly described the protest as the beginning of an occupation and ‘something unprecedented.’

He testified that Deputy Chief Ferguson realized the lawful protest had turned into an illegal occupation around the morning of January 29, 2022. He said, however, that in his view, the protest became illegal when an illegal act was committed. He then requested increased resources which request was reported in various media outlets. He stated that this media portrayal was replete with polarization, misinformation, and disinformation.

Former Chief Sloly states the level of “misinformation and disinformation” coming from mainstream media was “off the charts.” Says it eroded public trust in the police force.

Chief Sloly stated that PLT units requested additional time to negotiate with convoy organizers. He added that “there may not be a policing solution to this”. He opined that it was a national scope event, in which the protesters held many grievances beyond vaccine mandates; downtown Ottawa was “hyper volatile” and he witnessed Canada flags stuck on vehicles and behaviour that was clearly “antisocial”.

The “fun” during the protest had become a significant public trust problem. He stated he would not allow Ottawa “to look like a public theme park in the middle of a safety crisis.”

Residents in Ottawa experienced "significant emotional and psychological impacts" from the "fun" elements of the Freedom Convoy, says former police chief Sloly.
Sloly said OPS wanted to "take whatever lawful and ethical actions we could to stop it."

He testified that he lost trust in his deputies when Deputy Chiefs Bell and Ferguson made a decision to replace a member of the OPS incident command team without notifying him. Chief Sloly stated that the claim that he directed this replacement was “absolutely false”. He further stated that he was not aware of the replacement until well after it had occurred. He discovered that Deputy Chief Bell asked Deputy Chief Ferguson not to advise him of the incident commander replacement. He testified that time was lost due to the major level change being kept secret from him in the middle of a national security crisis. This, he claimed, was a significant lack of judgement of two high-ranking deputies.

Following the replacement, Chief Sloly directed that there be no further changes to the major incident commander team. PLT plans were delayed and confused because of this lack of communication. He admitted that some concerns arose from OPP resulting from said confusion. PLT significantly contributed to clearing protesters and further that the idea that PLT needed his approval for every action is a “complete fabrication and a lie”.

The operational plan designed by OPS eventually requested 1800 officers. With respect to public announcement of plans, he believed that OPS had an ongoing, evolving plan and that revealing it to the public would not be problematic. He did not believe that the OPP wanted to take over policing in Ottawa, bringing officers to Ottawa.

When asked about the exchange where he said he would “crush” anyone who opposed the plan, he confirmed the statement, adding that he needed to have full commitment across the command team about the plan going forward: “no major changes in the plan”. He added that his use of the word “crush” was unfortunate.

Prior to the invocation of the Emergencies Act, Chief Sloly stated that he did not consider it as an option. He testified that Commissioner Lucki may have been the first to inform him about the declaration.

By February 15, 2022, the trust factor in OPS was low. He decided to resign as he believed it to be in the best interests of the community. He received a call from the board chair asking if he would consider resignation. Ultimately, however, he said that it was his decision. It was indicated that he no longer had the confidence of the board. He was asked if anyone in the government told him or pressured him to resign. Chief Sloly understood that he had little to no support in all three levels of government. He stated that OPS was well positioned to end the occupation at the time of his resignation as they had received additional resources and experienced personnel.

Officers were using their discretion in enforcement efforts, based on a lack of resources and safety concerns. When asked what an injunction could have added, he said there could be new by-laws, higher fines, and other features. He said the protest was not a family festival, but instead a “tinderbox waiting to explode.” He did not provide reasons for this view.

When asked about the laws broken that made the protest unlawful, he stated that these included by-law, HTA offences, and criminal code violations: “too many to list.” He said that photos by police with protesters are useful in de-escalation, but he understood that it might contribute to the erosion of trust by the Ottawa community without context.

Asked about things he would do differently, he mentioned funding, structural deficits, national/provincial/local integration and, on a personal level, understanding how to be more resilient physically and psychologically.